A Yellow-browed Warbler is on Rathlin this morning. (Ric Else & Hazel Watson). 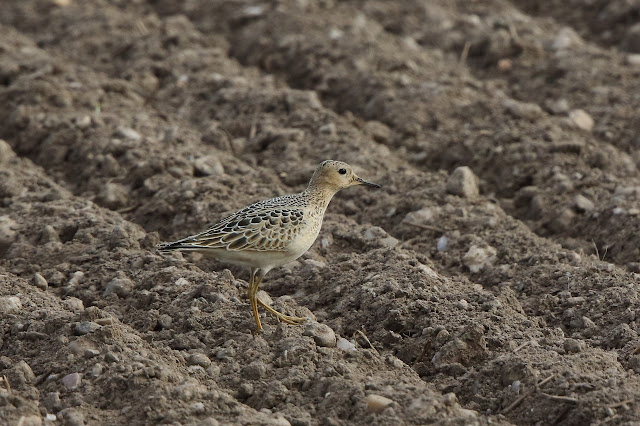 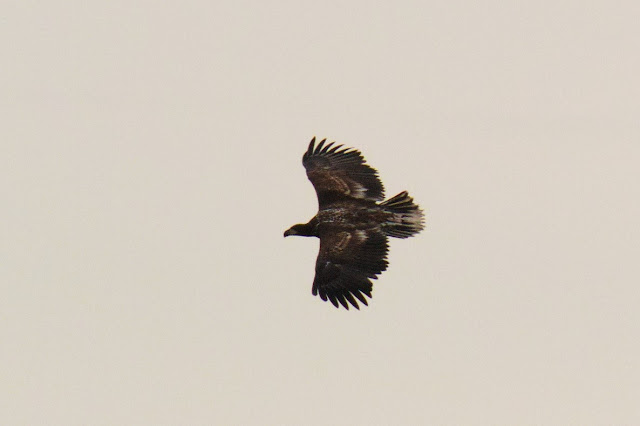 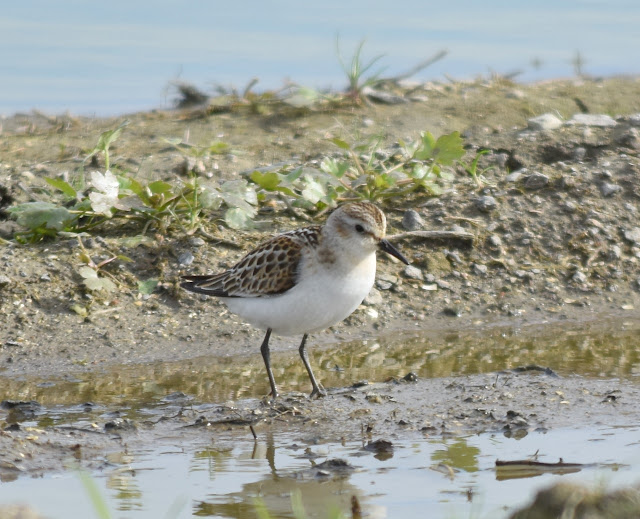 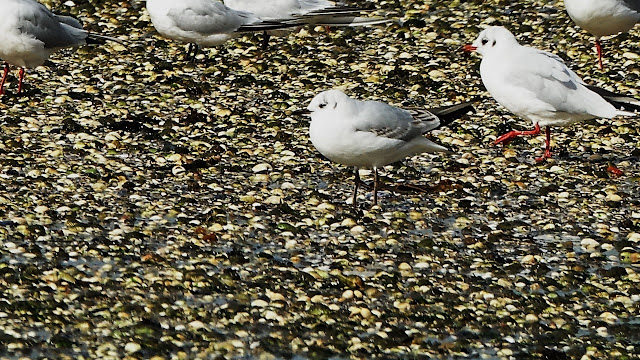 The Buff-breasted Sandpiper was still in the ploughed field at Ballykelly(still present at 17.30) , there was no sign of the American Golden Plover there. A Little Stint was at the eastern end of Myroe. (Ivan Quail, Nicky Lynn/Martin Deehan)

The Long-billed Dowitcher was seen again at Mullagh, Lough Beg this afternoon; also a Pectoral Sandpiper, Curlew Sandpiper and 12 Ruff in the area. (David Steele)

A juvenile American Golden Plover and a Buff-breasted Sandpiper are at Ballykelly with a Golden Plover flock (Garry Armstrong) Location:
Dropped pin:
https://goo.gl/maps/ZFrGjnMSgDk2nTt56
The AGP was at 4pm at the west end of Myroe (Tony Dodds / Billy Miskelly / Gerard McGeehan / Jeff Larkin)  The bird was back at Ballykelly at 6pm (Daniel Newton)
5 Grey Plover, 2 Greenland Wheatear, a Peregrine and a Merlin were also at Ballykelly. (Garry Armstrong, Neal Warnock).
The Marsh Harrier was still at Portmore Lough RSPB, 3 Kestrel were also present. A Merlin was at Ballinacor on the south shore of Lough Neagh. (Ed O’Hara)
42 Slavonian Grebe were off Myroe. (Jeff Larkin)
A Pink-footed Goose was with circa 35 Greylag, 3 miles north of Portaferry (Michael Latham)
4 Ruff were at RSPB WoW (Daniel Newton)
4 Pink-footed Geese and a Sand Martin were at Kearney (Richard Weyl)
A Pied Flycatcher was on Arranmore, also over the weekend there was a Yellow-browed Warbler. 20 Crossbills, 3 White Wagtails, 6 Bonxies and 3 Sooty Shearwaters. (Davy Hunter).
Around 30 Whooper Swans arrived in several flocks late last night in Upper Lough Erne at Crom. They were sighted again today. (Paul Lynas).
A single Whooper Swan was just outside Ballygally, Larne. (Linda Thompson),
A ring-tailed Hen Harrier was in the Antrim hills, 2 Pink-feet were seen in flight. A Merlin and a Wheatear were at Sandy Bay in Larne. (Brian Halligan).
2 juvenile Hen Harriers were on Rathlin. (Ric Else & Hazel Watson).
Buff-breasted Sandpiper & Greenland Wheatear, Christine Cassidy: 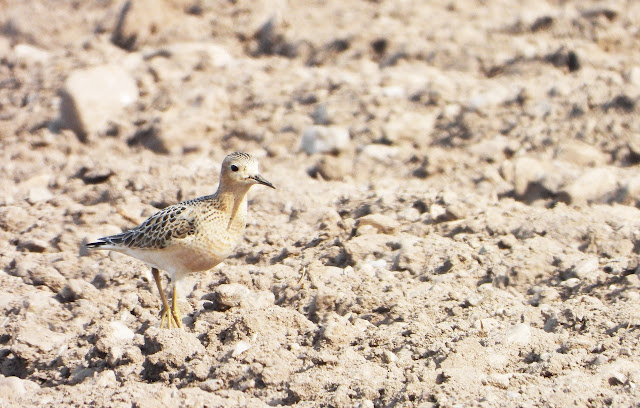 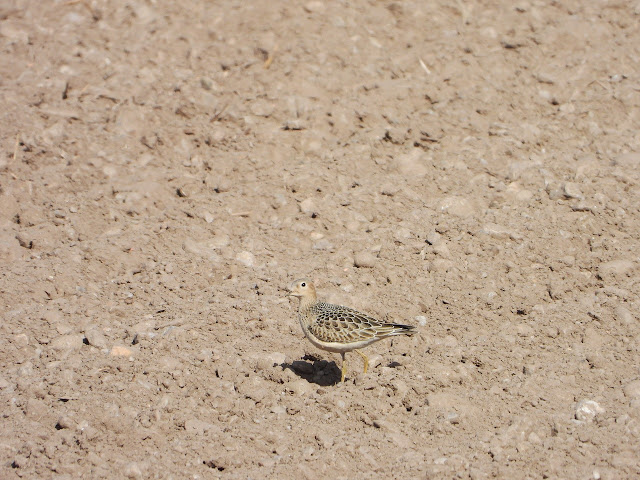 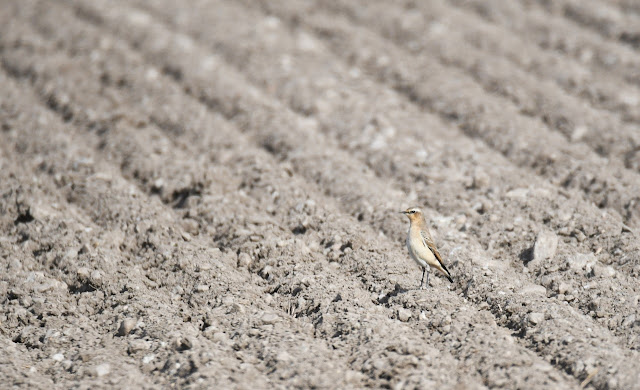 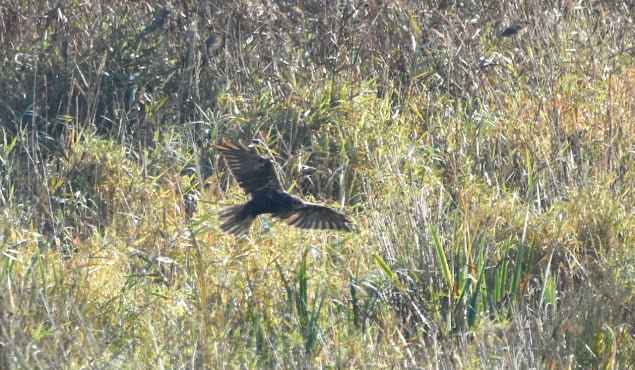 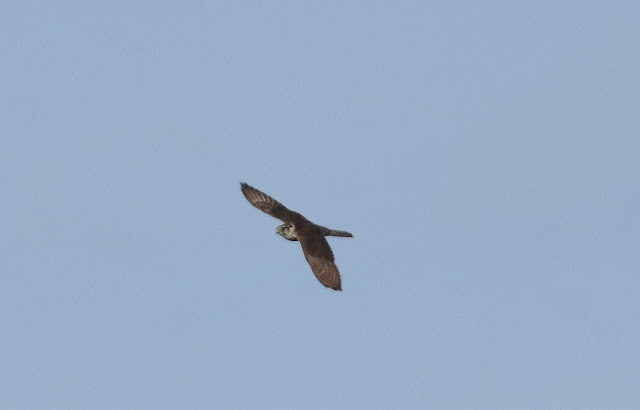 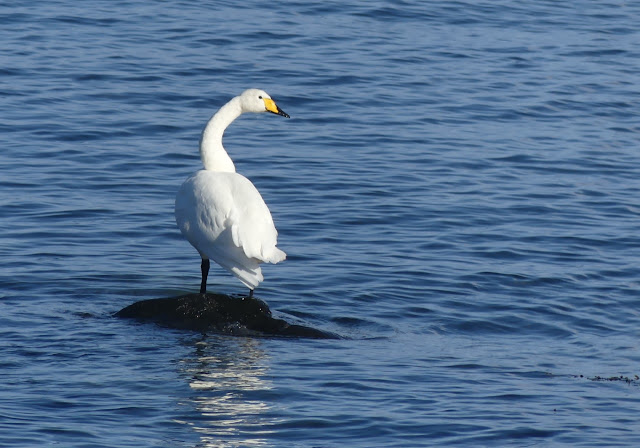 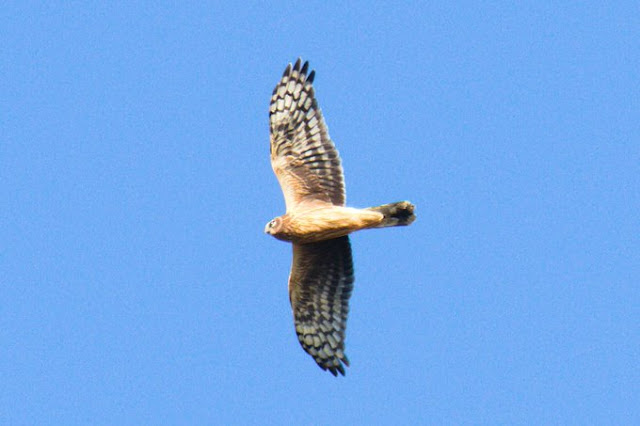 14 Pink-footed Geese were at Kearney,  2 Wheatear were along the shore.  (Billy Miskelly, Garry Armstrong)
A Yellow-browed Warbler was seen and heard in a garden in Comber, near the Ballygowan Road (Chris Shaw)
A first winter Glaucous Gull and 3 Barnacle Geese were seen at Fanad Head this morning (Wilton Farrelly).
Two ring-tailed Hen Harriers were in the Antrim hills. (Kenny Moore, Michael Latham).
A Great Spotted Woodpecker was at the Ecos Park in Ballymena. (John Parkinson).
Dargan Bay in Belfast Lough today had 6 Common Scoter, 2 Red-Breasted Mergansers, a Red-throated Diver, 5 Curlew, 1 Whimbrel, 6 Bar-tailed Godwits, a Curlew Sandpiper, a Greenshank, a 1cy Mediterranean Gull and a 1cy Peregrine flew over. (Kevin Kirkham).
4 Ruff were at Belfast Lough WOW reserve. (Stuart McKee).
10 Pink-footed Geese and a Red Kite were seen over Fairhead. (Jeff Larkin).
At St John’s Point visible migration from 8am to 10am produced 1 Pinkfooted Goose, 1 Merlin, c. 500 Skylarks, 300 Linnets, 30 Siskins, 10 Redpolls, 4 White Wagtails, 5 Goldcrests, and 30 Golden Plover (Chris Murphy).
Thanks to John Parkinson for the picture of the Great Spotted Woodpecker, to Thomas Campbell for the pictures of the Razorbill and the Gannet and to Michael Latham for the picture of the Hen Harrier: 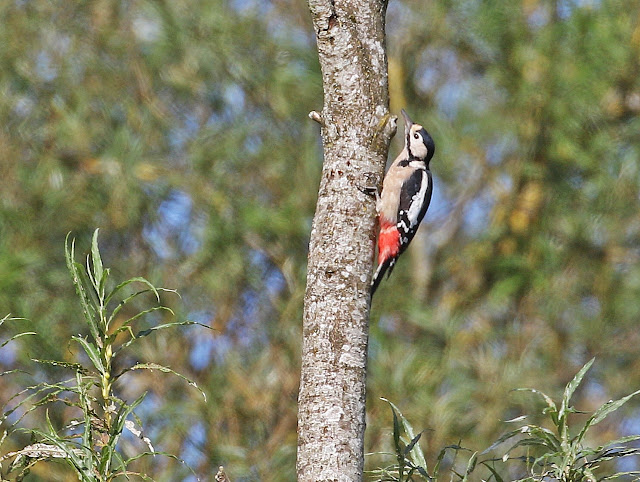 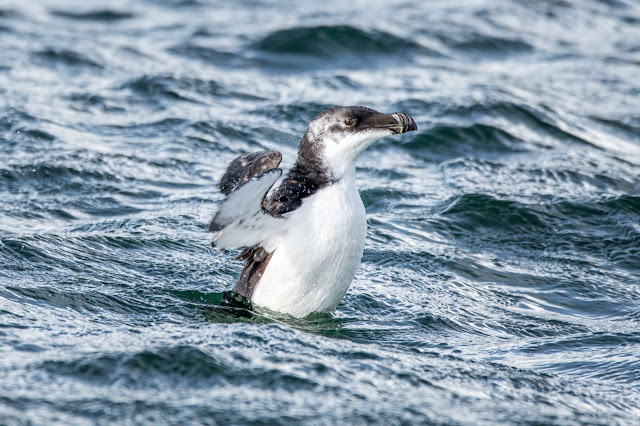 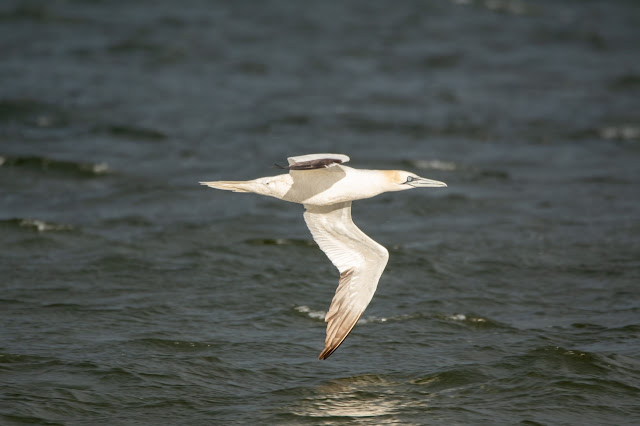 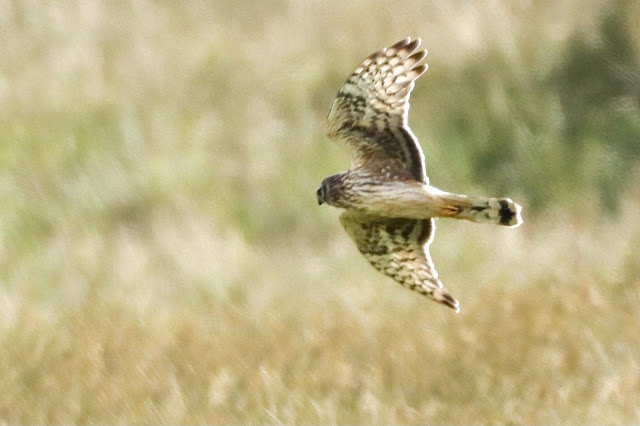 There was no sign of the Bobolink at all today.
The juvenile Long-billed Dowitcher was seen again at Lough Beg today, along the shoreline at Mullagh. Also 25 Ruff and a Pink-footed Goose in the area.(David Steele)
60 Whoopers were back at Myroe (Lindsay Hodges)
2 Mandarin Duck were at Broughshane on the River Braid.  A seawatch at Ramore was very quiet - 4 Bonxies, 3 RT Diver, 1 GN Diver, 1 Arctic Tern, 1 Manx Shearwater, 4 Teal + Gannet and Kittiwake (Ian Enlander)
3,000 Skylark where noted between 10am - noon at St Johns Point.(Chris Murphy)
A Yellow-browed Warbler,  50+ Coal Tits and 2 Wheatear were the best on Arranmore today (Davy Hunter)
Yesterday 122 Pink-footed Geese were observed flying over Rathlin (Ric Else / Hazel Watson)
A seawatch at Ramore Head produced 1 Sabine's Gull and 3 Great Skua. (Hill Dick)
24 Pink-footed geese flew over Orlock today (Richard Weyl)
2 juv Sabine's, 6 Bonxie, 2 Red-throated diver, and an Arctic Skua were at Ramore Head this evening. (Matthew Tickner)
Our thanks to Ian Enlander for the Mandarin photo  to Lindsay Hodges for the Wheatear and to David Hill for the Arctic Skua. 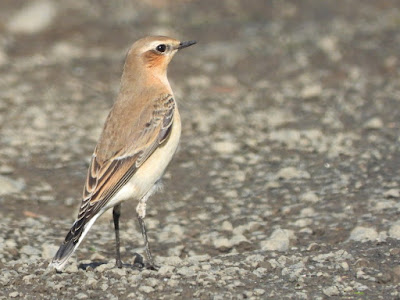 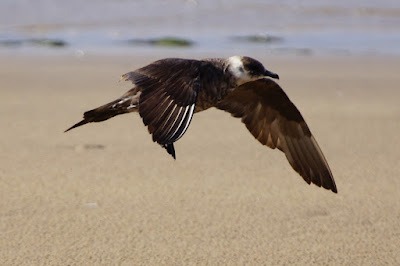 The Bobolink is this morning in the brambles and rush patch, opposite the cottage for sale by Sherry Fitzgerald, at Fanad Head. (Robert Vaughan)
Two Lapland Bunting were seen flying low at the Bann Estuary. A Chiffchaff was also present (Richard Donaghey)
12 Pink - footed Geese where seen nr Ballycarry.(Cameron Moore)
Bobolink, Dick Coombes: 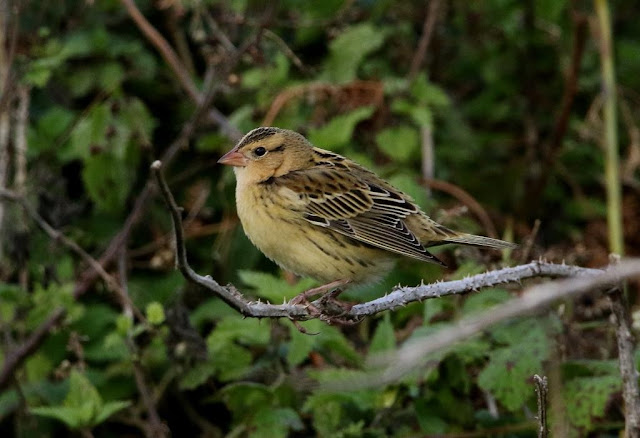 The Bobolink is back in the brambles and rush patch, opposite the cottage for sale by Sherry Fitzgerald, at Fanad Head. The bird was still present at this location at late afternoon (Chris Ingram / Brian Porter / Dick Coombes / Tony Dodds)
A Yellow-browed Warbler is at Kinramer on Rathlin this morning and a Lapland Bunting flew over. (Ric Else / Hazel Watson)
8 Lapland Bunting and 37 Pink Feet were at Fair Head, Co Antrim. A Curlew Sandpiper was at the Bann Estuary (Gerard McGeehan, Shirley Dunlop).
70 Pinkfeet in 4 groups were over Killough today; 3 Wheatears, a Blackcap, 2 Chiffchaffs, 4 Goldcrests, 400 Skylarks and c. 700 Linnets were at St John’s Pt this afternoon (Chris Murphy)
Yellow-browed Warbler, Ric Else: 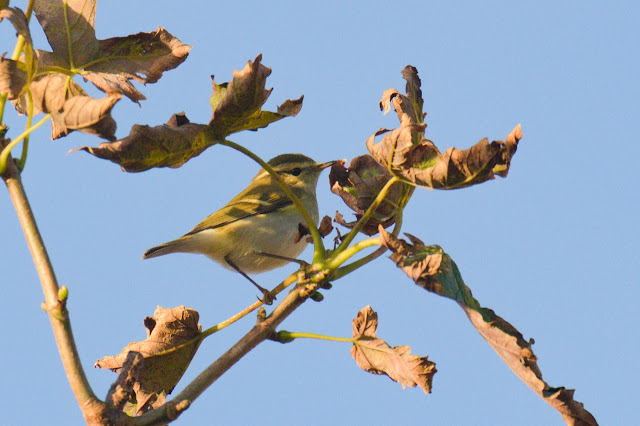 The Bobolink was still at the wet field at Fanad Head, Donegal this morning, close to this point - 55.2753479, -7.6542799 (Richard Hunter). The bird was looked for from 5pm to darkness without success. 50 Pink Feet were seen flying over. (John Spottiswood)
Bobolink, Richard Hunter: 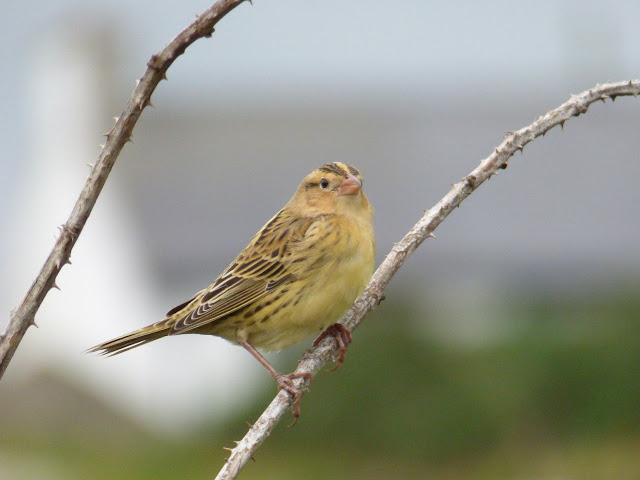 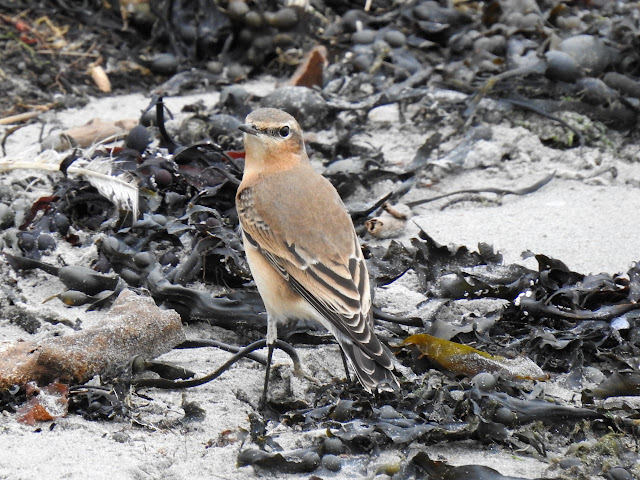 The Bobolink is still at Fanad in Donegal this morning, much closer to the coast than yesterday. It was in the field east of the Sherry Fitzgerald house for sale. (Mark Stewart)

A juvenile Long-billed Dowitcher in southwest corner Lough Beg this evening. Found at 1830, present up to at least 1930. Also two Curlew Sandpipers were present. (David Steele)

An adult Mediterranean Gull was at Kinnegar Shore (Tony Dodds)

A Bobolink is at Fanad Head, in front of the cottage for sale by Sherry Fitzgerald. It favoured the dense area of rushes / brambles. The bird was seen to 4:05pm when it flew north (Wilton Farrelly)
Four Lapland Buntings were at Fair Head. (Ivan Quail & Nicky Lynn).
A red-head Goosander was off Ballykelly in Lough Foyle. (Neal Warnock).
A male Hen Harrier was in the Antrim hills, 3 Red Grouse were also seen. (Kevin Kirkham).
A Slavonian grebe off Glynn Station, Larne Lough this morning (Brian Sutton).
Four White Wagtails were at Ballyfrench and five Mediterranean Gulls were at Portavogie. (Richard Weyl).
The Bobolink at Fanad and thanks to Kevin Kirkham for the picture of the Grey Wagtail: 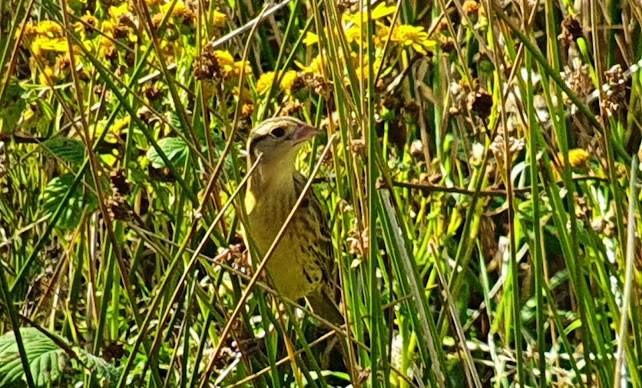 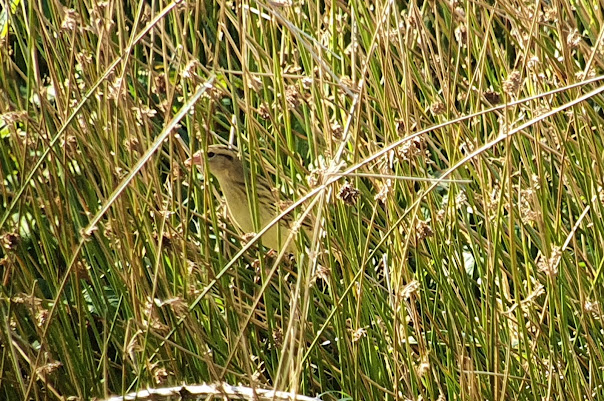 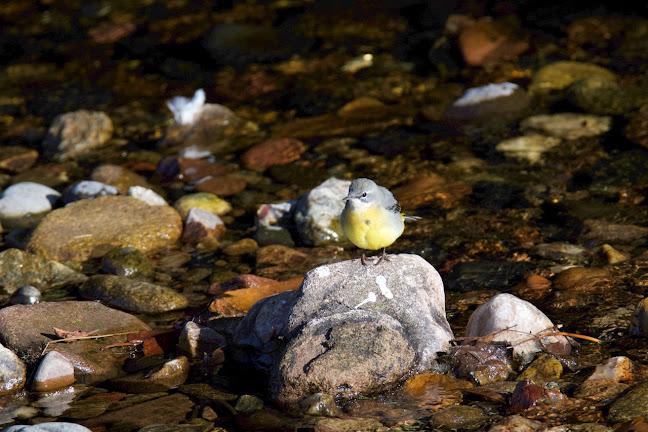 The Marsh Harrier is still at Portmore this morning.  (Garry Armstrong).
A Ruff, 3 Blackcaps and a Chiffchaff were at Belfast WOW reserve, (Stuart McKee).
4 Ruff were at Belfast WOW (Gerard McGeehan & Shirley Dunlop)
Grey Point in Belfast Lough from 16.30 to 18.00 hrs had 1 Great Skua, 2 Arctic Skua and 1 Great Northern Diver. (Paul McCullough).
A Long-eared Owl, 2 White Wagtail and a Chiffchaff were at Kearney. (Richard Weyl).
Thanks to Michael Latham for the picture of the Dunlin and to Thomas Campbell for the pictures of the Wheatear and the Red-throated Diver: 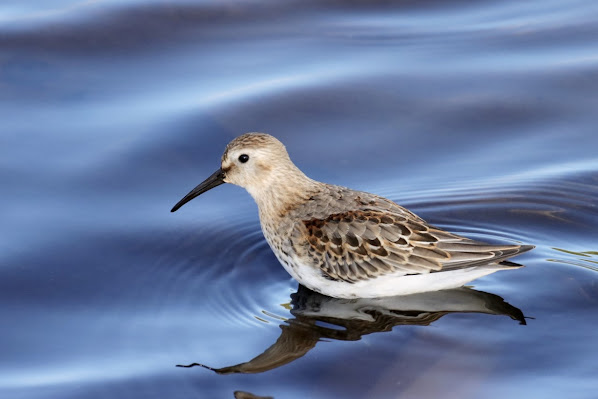 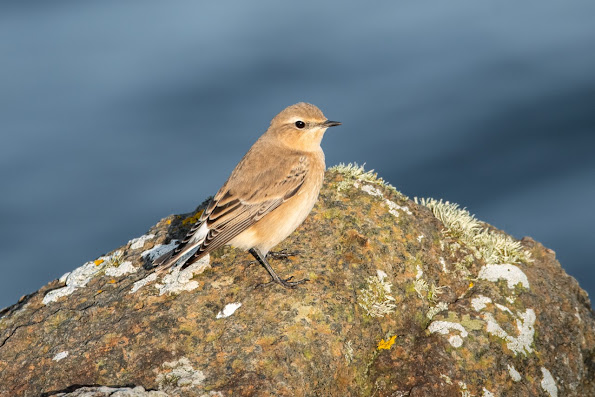 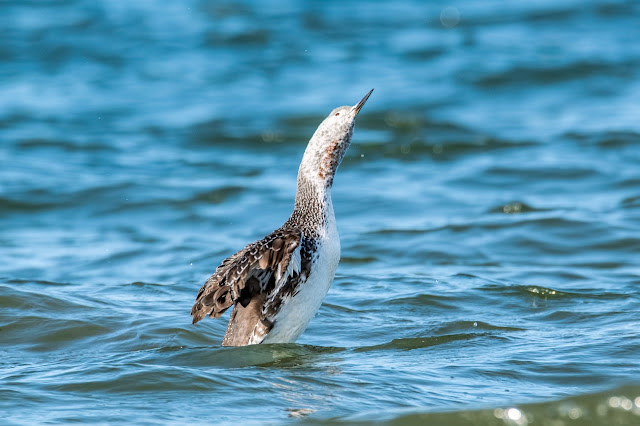