Approximately 700 Brent Geese were in a field at Murlough, Co. Down, but only one bird was a juvenile. It appears the birds had a very poor breeding season last year an tho is the only juvenile reported. (David Nixon).

An adult Mediterranean Gull and a Little Gull were at Whitehead seafront today. (Cameron Moore). 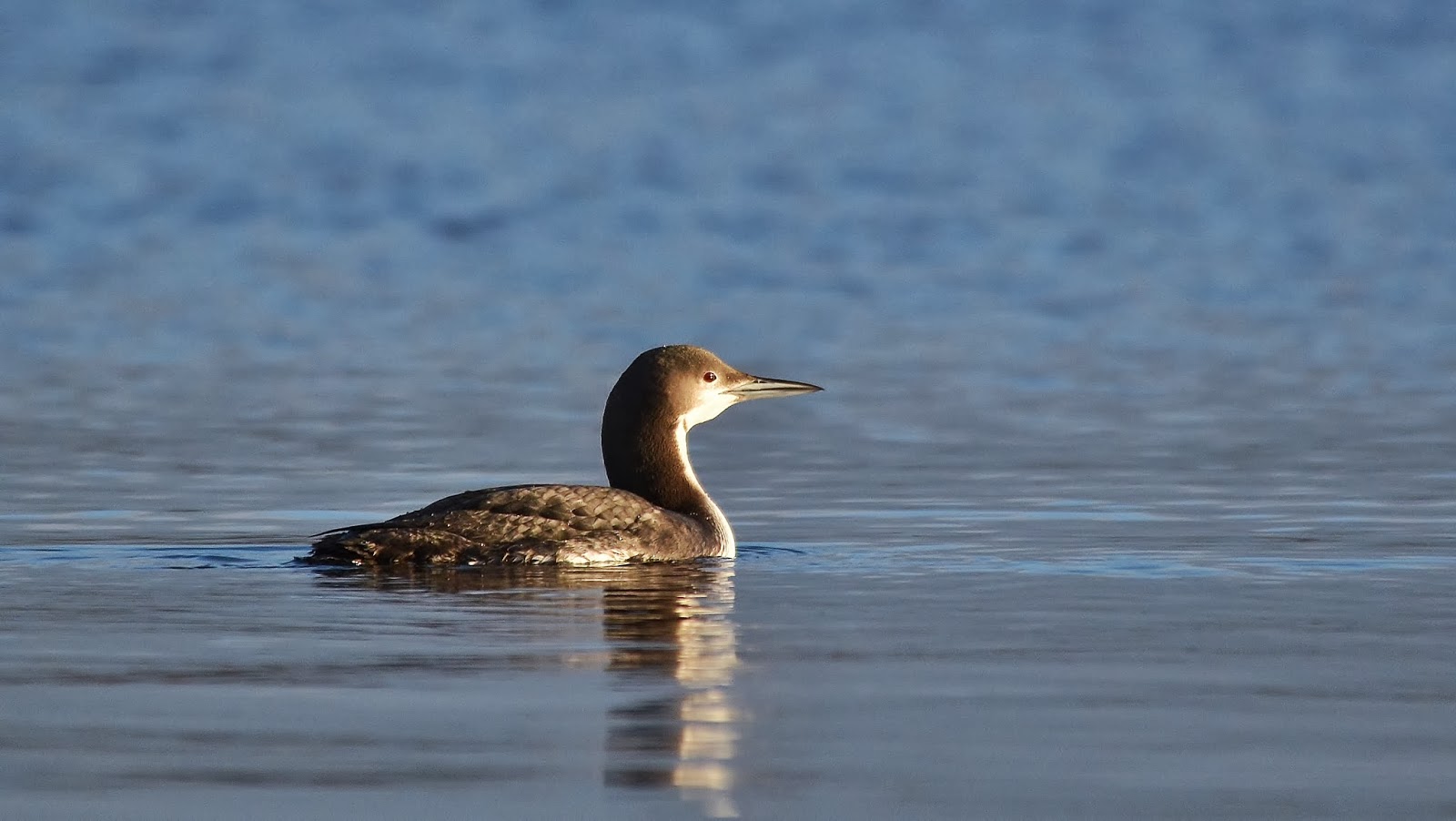 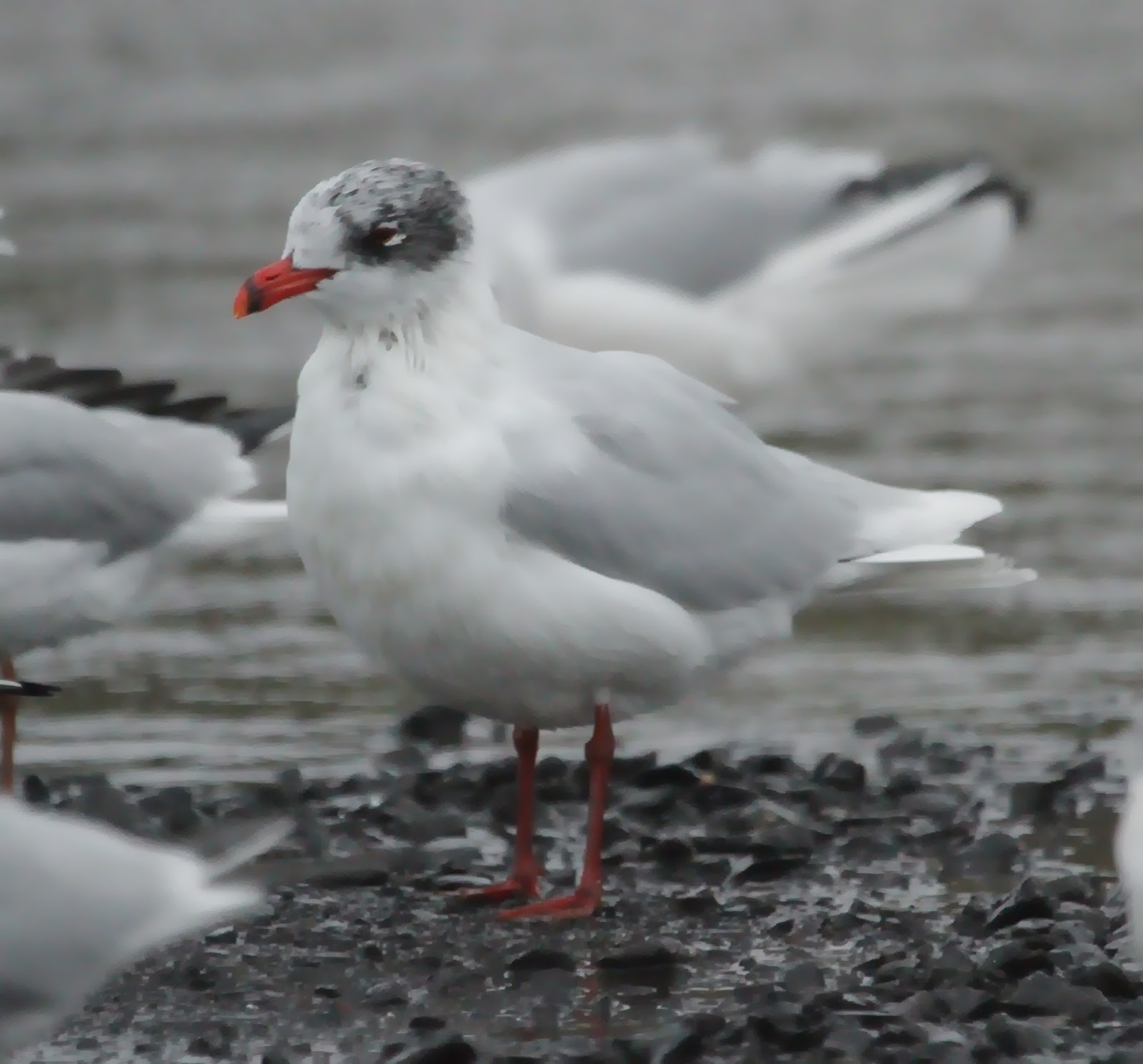 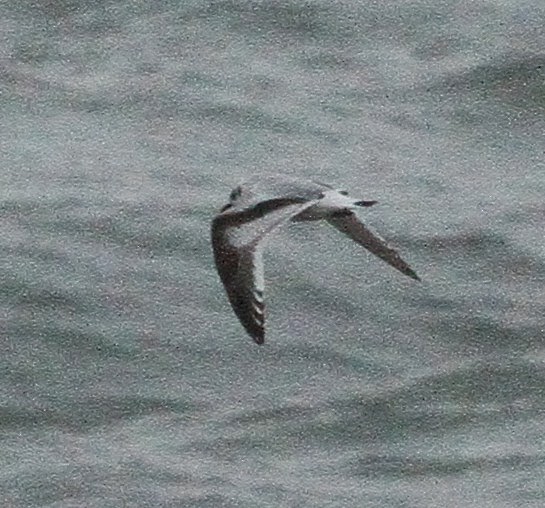 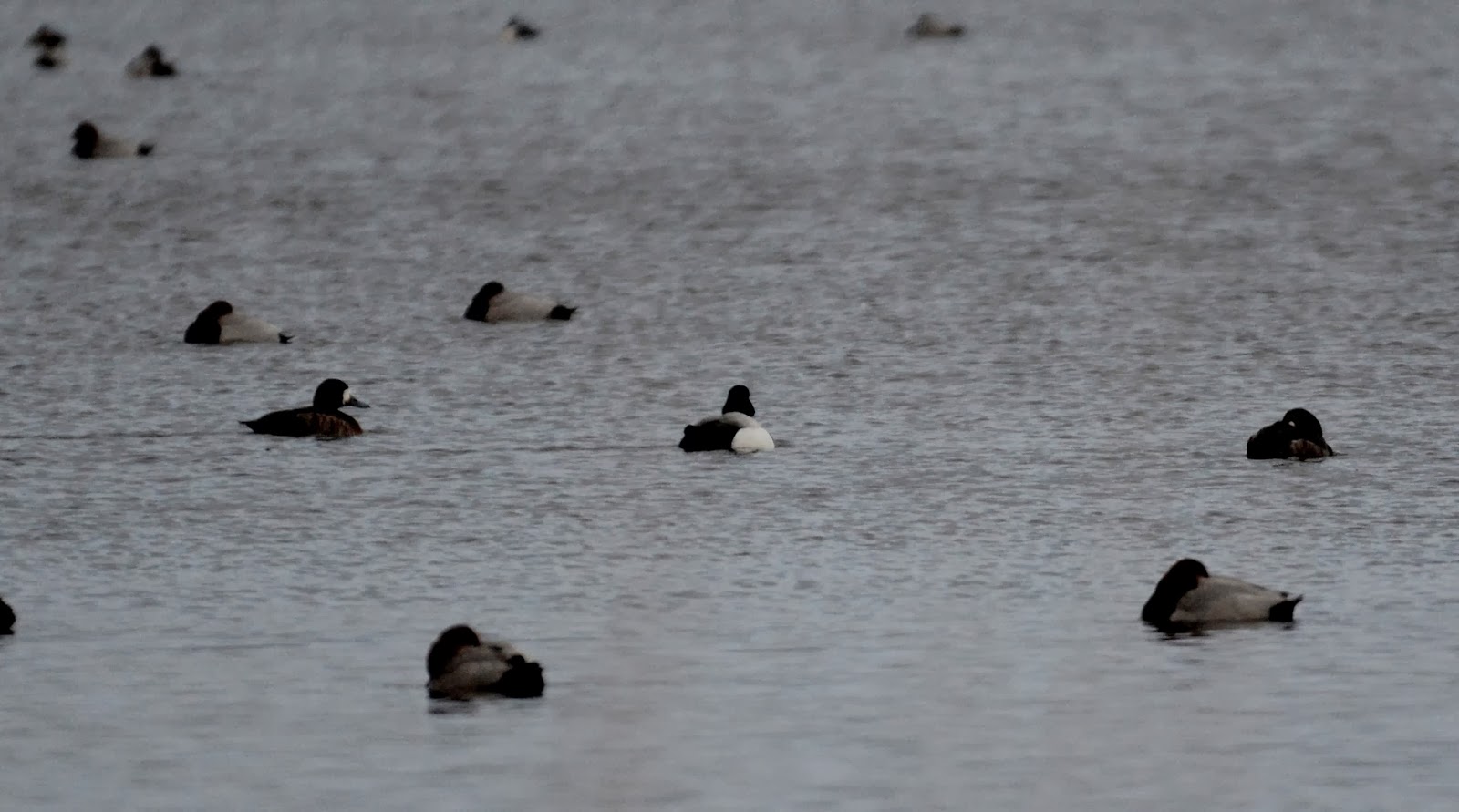 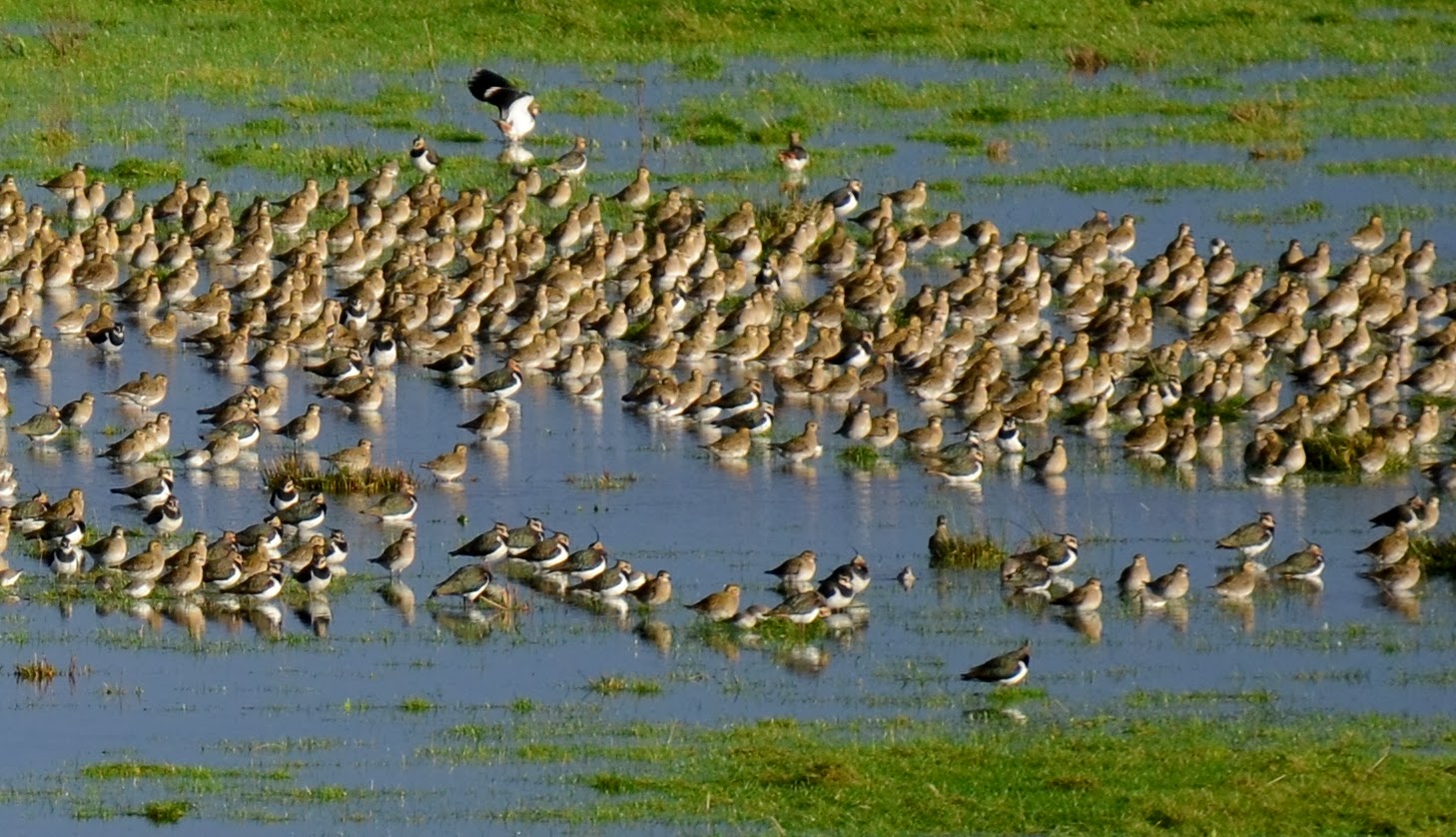 The Pacific Diver was still at Lough Fea on the western shore (Christine Cassidy / Theo Campbell) see photo below.

The Glossy Ibis was at Larne Lough. It was at Steel's Point on the Island Magee side opposite the saddlery on the Larne side where it was originally found (Cameron Moore)

A flock of around 300 Barnacle Geese were in a field just to the north of Ardmillan, Co Down, this morning (Ron Price)
An Ivory Gull was found today at Cromane, Co Kerry (Seamus Enright)
Over the last couple of weeks we have had some truly wonderful images of Pacific Diver, arguably  the best ever in the Western Palearctic and below is no exception, the top image taken by Christine, the second by Tom McCreery...stunning.
Also thanks to Cameron Moore for the top Glossy Ibis pic and Cecil Smith for the lower one: 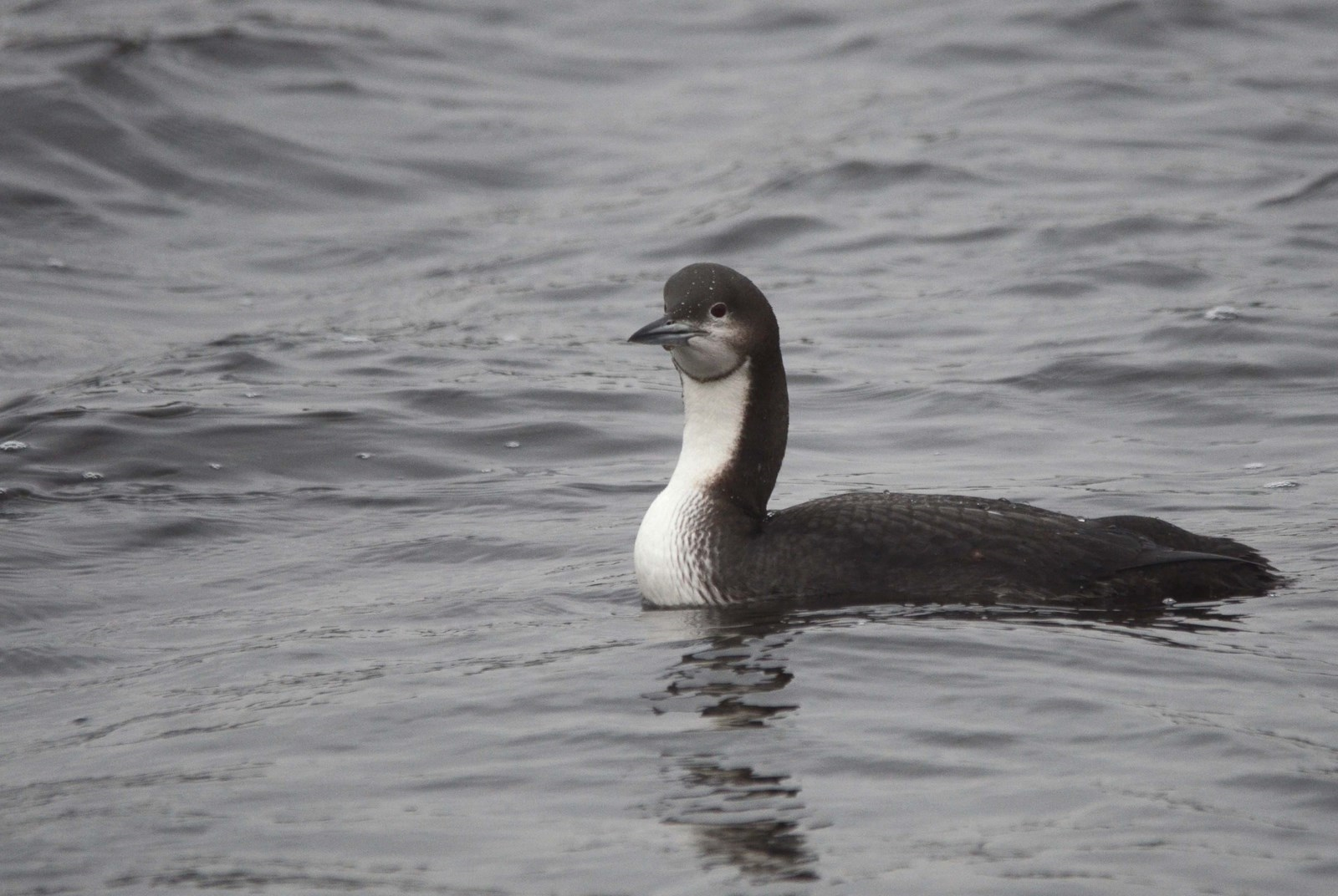 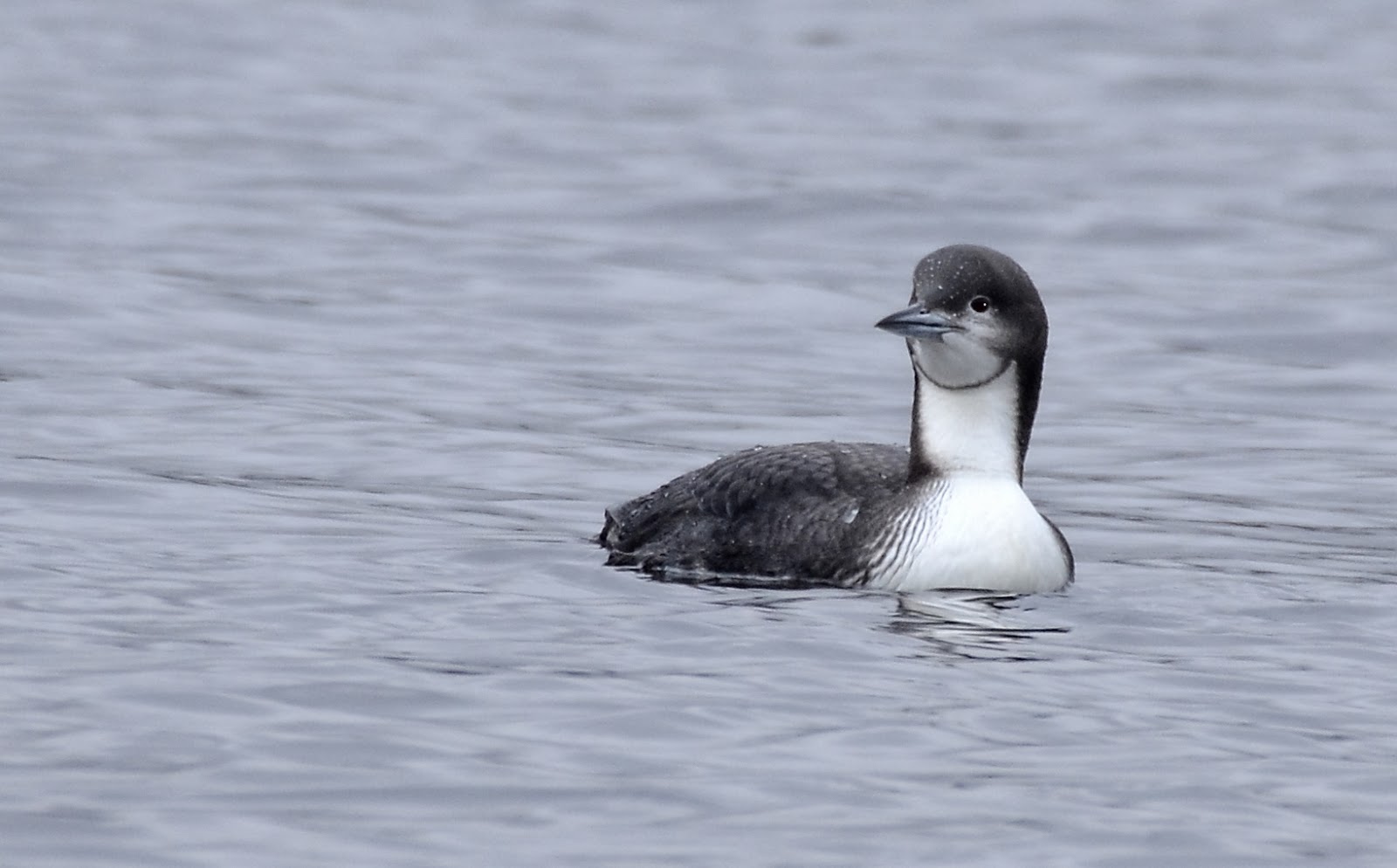 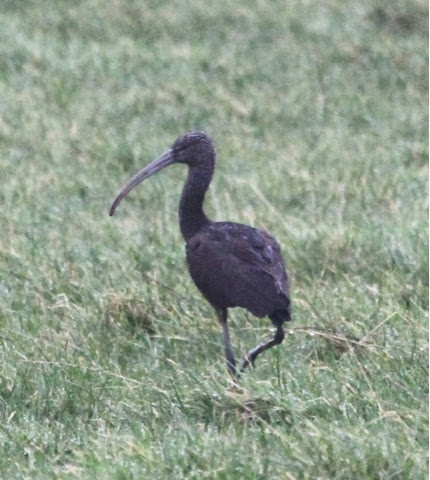 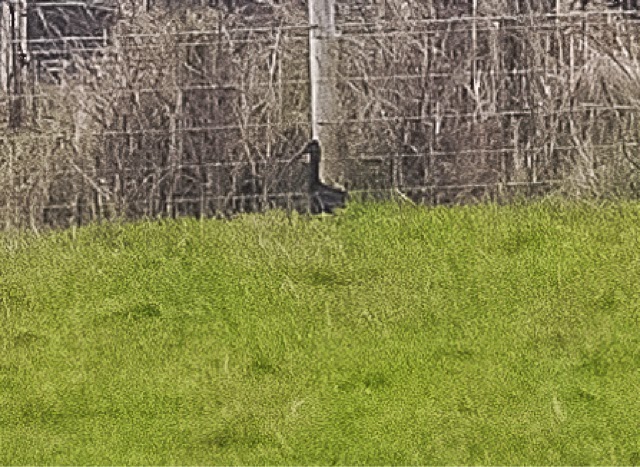 *FREE EVENT*   A BTO Garden BirdWatch workshop is being held at Oxford Island Discovery Centre on Wednesday 5 February from 10.00am to 2.00pm (lunch included). To discover what’s involved in this weekly all year round survey and its value to conservation, please contact the Discovery Centre on 028 3832 2205 or email pflowerday@live.co.uk

Northern Ireland Raptor Study Group are holding a conference on Saturday 8th March 2014 at Oxford Island and welcome everyone (young and old!) with an interest in monitoring raptors in Northern Ireland.

The conference will demonstrate what the NIRSG is all about and why we need to monitor birds of prey. We will hear talks from people involved in raptor monitoring, and show how you can get involved.

The conference will cost £10, payable at the door, and tea, coffee and a buffet lunch will be provided.

More details, including an abstract of speakers, will be distributed in due course.Places are limited so if you are interested in attending please contact the raptor officer at raptorofficerni@gmail.com, and spread the word!

The Glossy Ibis was still in a field opposite the saddlery on the Larne road at Ballycarry. (Samuel O'Hara)
2 adult Mediterranean Gull were off Glynn in Larne Lough (Jeff Larkin)
Lower Lough Erne Islands RSPB reserve had 2 Great Northern Diver and 2 Long-tailed Duck (Fionnbarr Cross)
Thanks to Joe Donaldson for the Ring-necked Duck pic and Christine Cunningham for the pic of a Collared Dove: 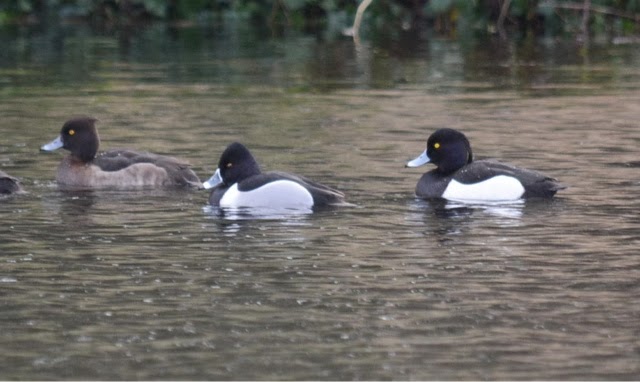 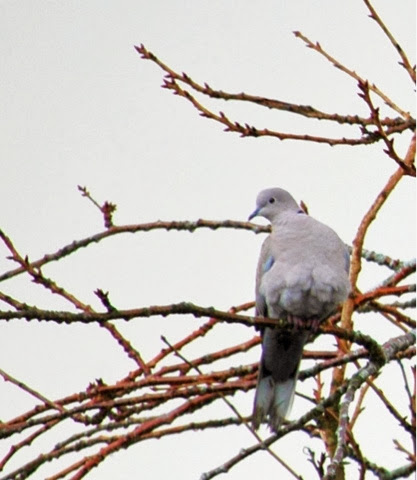 
Blackcap have increased in numbers during both winter and breeding seasons.  There has been a 77% increase in the number of 10km squares occupied in winter since the 1981-84 Winter Atlas throughout Britain and Ireland.  However, the breeding distribution increase in Ireland since the 1968-72 Breeding Atlas has been an amazing 249%!  The map below shows that Blackcap now breeds throughout Ireland with only very few 10km squares not showing a record: 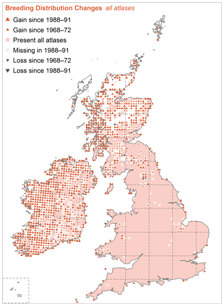 Shane Wolsey (with thanks to Dawn Balmer and Simon Gillings)
BTO NI Office
ACKNOWLEDGEMENTS
Distribution maps from Bird Atlas 2007-11 which is a joint project between BTO, BirdWatch Ireland and the Scottish Ornithologists' Club. Maps reproduced with permission from the BTO.


The Bird Atlas 2007–11 has been published, and after all the anticipation, it has more than lived up to expectations.  What a fabulous book, for how it looks and feels, for the incredible wealth of information it contains, and for the clarity with which the information is presented. 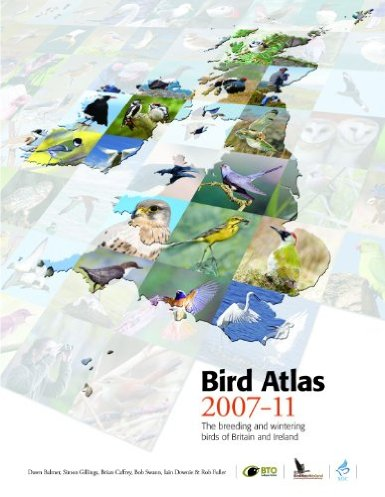 Bird Atlas 2007–11 covers all of Britain and Ireland.  3850 10km squares were surveyed, with approximately 40,000 observers submitting more than 19 million records over 4 years of fieldwork.  What a mammoth undertaking – and no less so in Northern Ireland. Here we had 160 10km squares with approximately 1280 tetrads (2x2km squares) each of which needed to be surveyed a minimum of 4 times – that was 5120 surveys – and that was just for the abundance mapping!  With so few observers in Northern Ireland this was a major undertaking.
However it was all worthwhile. At a Britain and Ireland level almost every species has a story to tell. The Atlas has shown that many of our bird populations are changing either their geographic distribution or their abundance, or both.  This is seen in many of the species found in Northern Ireland.
Shane Wolsey has kindly prepared a series of articles for the Blog which we are publishing. We will firstly report on some good news stories, then highlight some species of concern and highlight some other interesting findings.
A story we knew that was going to be told is the colonisation of Ireland by Great Spotted Woodpeckers. The first proof of breeding in Northern Ireland was in 2006, with breeding confirmed in the Republic of Ireland in 2009 – the breeding distribution map shows how they have colonised the east, with some evidence of westward expansion. Formerly a rare and irregular visitor, colonists were assumed to originate from Scandinavia. However, genetic analysis of feathers obtained in nests has shown that Britain is their true origin. There has been further expansion in Britain too, mostly in Scotland, but also in-filling in eastern and western England, representing a 19% increase in range since the 1988–91 Breeding Atlas. 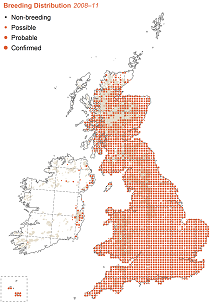 As said at the start, almost every species has a story to tell, making the Bird Atlas 2007-11 a fascinating production – check out what is happening with Ravens, Buzzards, Dippers and Lesser Redpolls! This is a source of information you really should not be without. Look out for further posts from us in the next few days.

Shane Wolsey (with thanks to Dawn Balmer and Simon Gillings)
BTO NI Office
ACKNOWLEDGEMENTS
Distribution maps from Bird Atlas 2007-11 which is a joint project between BTO, BirdWatch Ireland and the Scottish Ornithologists' Club. Maps reproduced with permission from the BTO.

The Pacific Diver was still at Lough Fea and present until dusk. (Joe Donaldson).
The drake Ring-necked Duck was still at Castle Ward, Co Down (Joe and Tony Donaldson)

A male Brambling was visiting a garden at Pirrie Road off the Belmont Road in Belfast. (Philip West).

4 Snipe were being spooked by a Buzzard at Balloo wetlands this afternoon. (Lindsay Hodges).

Thanks to Iris Millar for the pictures of the Great Northern Diver and to Lindsay Hodges for the picture of the Snipe and Joe Donaldson for the Run-necked Duck and the Pacific Diver: 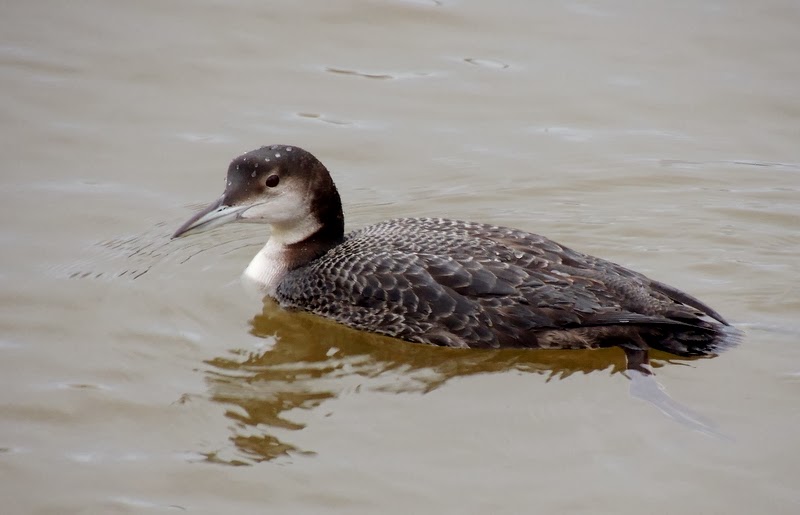 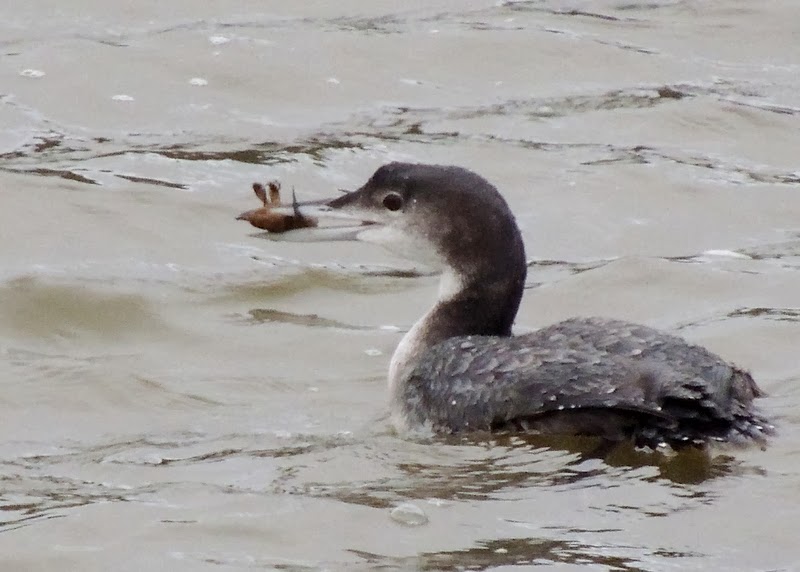 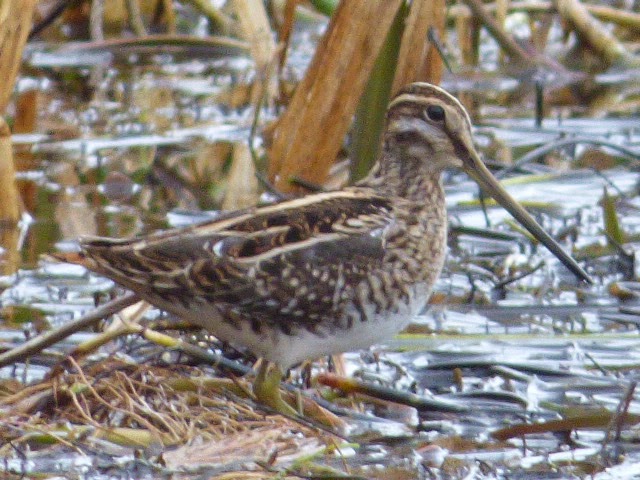 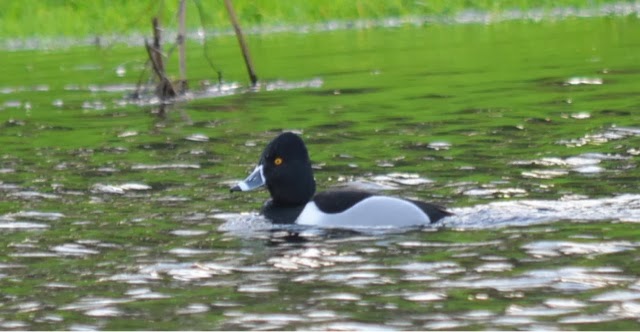 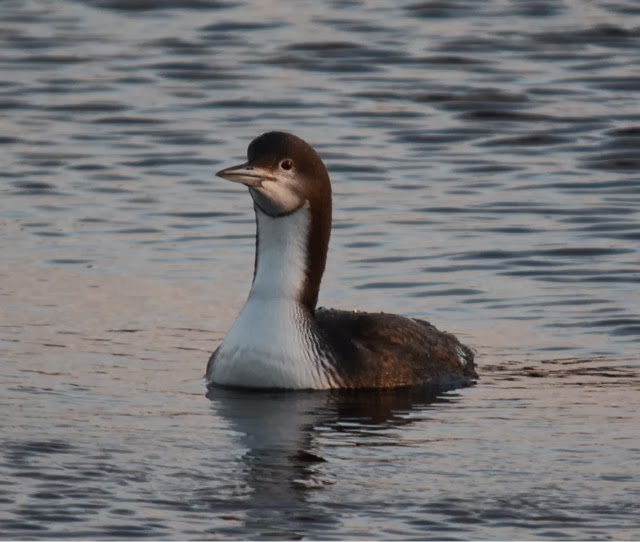 A Glossy Ibis was at Kinnegoe Embankment. It was in fields beside a private lane (Raughlin Lane) along Derrymacash Road. A Kingfisher was at Oxford Island Discovery Centre (David Clarke). This is the fifth sighting of Glossy Ibis this month, it is of course very difficult to tell how many individual birds there are because they are highly mobile, but it could involve at least 3 birds.
A flock of 75 Twite was in fields at the Comber Estuary along Killinchy Road near the garage (Karl Hamilton).
Late news for yesterday was that the adult Ring-billed Gull and the first winter Glaucous Gull were still at Portrush East Strand car park. (Birdguides)


The RSPB Belfast Harbour reserve will close at 1pm this Friday (31 January) as work begins on the Belfast Window on Wildlife (WOW) refurbishment project. The visitor centre and trackside hide will be inaccessible but the roadside hide will remain open until further notice. The reserve is expected to fully re-open in September and regular updates will be posted via the RSPBNI Facebook page.

Thanks to Cameron Moore for this pic of the Whitehead Iceland Gull: 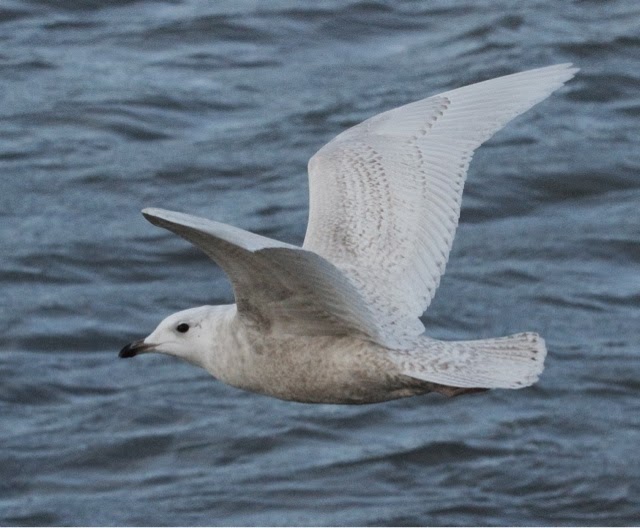 Nigel Beers Smith has a DVD and book on the time he spent in Mountshannon County Clare, documenting and photographing the first White Tailed Sea Eagles to successfully breed in Ireland in over 100 years.

Nigel spent 8 months every day documenting this pair, becoming, in sort, their guardian, watching over them making sure that over enthusiastic people didn't get too close to the nest. This story is full of major ups and downs, it was a roller coaster ride of event that led to an historic success story, all of which can be found in the book Ireland's First.

Nigel has also brought out a second book with 100+ of my favourite photos from start to fledging, which I am offering free to people that buy the hardback of "Ireland's First".
You can obtain a copy and see further information at: 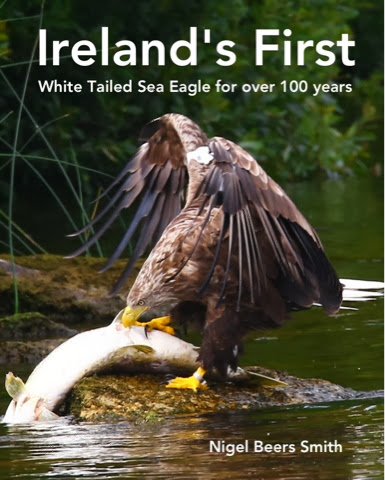 The Pacific Diver is still present at Lough Fea, Co Tyrone (Ian Graham / Ed O'Hara / Mark Killops)
The Siberian Chiffchaff was still showing at Rockport School at the coastal path near Holywood (Ian Graham)
8 Yellowhammers were in a garden at Richhill, Co.Armagh. (Andrew Poots)
2 Twite were at Glenarm and a female Goosander offshore (Neal Warnock)
A little egret was at the floodgates, Newtownards and 2 more were at Pattons Marsh. (Karl Martin)
A second-winter Iceland Gull was at the slipway in Whitehead (Cameron Moore)

4 Pink-footed Geese were at the swan-fields at the Creagh near Toome (Mark Smyth, Gary Brown)
A mixed flock of c150 Fieldfare and mistle thrushes were near kearney today (Chris Henry)
For anyone interested in Ireland's First successful breeding White Tailed Eagles, please see the previous blog post.
Thanks to Ed O'Hara for the top pic of the Pacific Diver, Mark Killops for the second one and Karl Martin for the Little Egret: 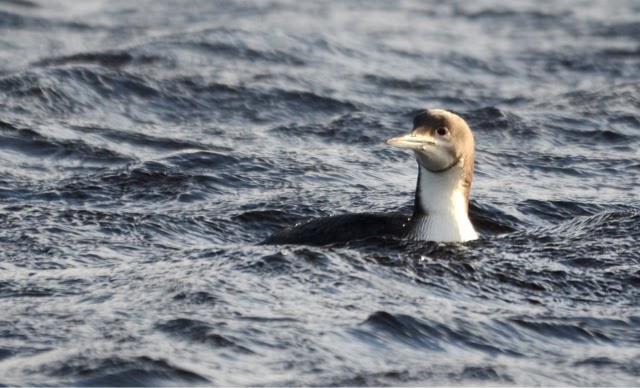 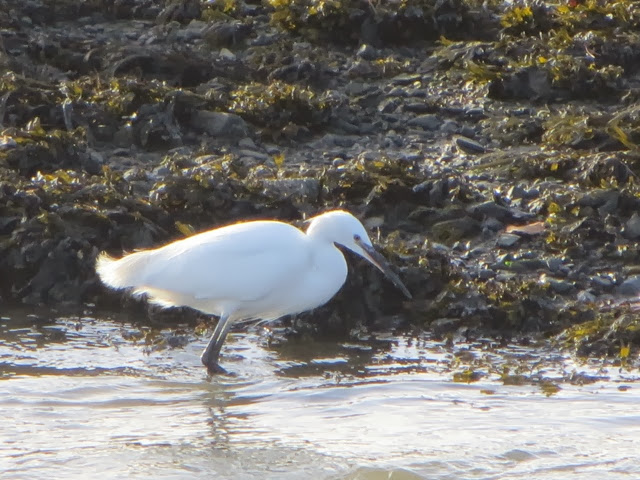