A winter plumaged Little Gull was at the Balancing Lakes in Lurgan, see pictures below. (Noel Austin & Tom McCreery).

A male Brambling was in a garden at Grove roundabout, Ballymoney Road, Ballymena. (Iris Millar).

A male Brambling was still visiting a garden at the Spa near Ballynahinch, 3 Redpolls and a male Siskin were also present. (David Nixon).

A male Brambling is also visiting a garden at Gilnahirk in east Belfast. (Ron Price).

2 Waxwings were along the road in Crawfordsburn. (Kerry Leonard).

7 Waxwings were a mile outside Carryduff on the Saintfield Road heading towards Saintfield. (Garry Armstrong).

3 Woodcock flew over the M1 at Moira this evening. (Ed O'Hara).

30 Waxwing were along Toome Road in Ballymena (David Steele).

3 Purple Sandpiper were west of Pickie in Bangor (Derek Polley).

25 Waxwing were at Cairn Road in Coleraine but flew off at 1.20pm (Lowell Mills, Richard Hoy).

At Whitehead 2 Brambling and a Tree Sparrow were in a garden and 39 Waxwing along Islandmagee Road. At least 3 Little Egret were at Ballycarry Bridge and a Common Scoter and 2 Red-throated Diver at Mill Bay (Cameron Moore).

A Short-eared Owl was along the Ulster Way above Sallagh Braes (Karl Hamilton).

Yesterday at Lough Foyle 32 Slavonian Grebe, a Great Northern and 10 Red-throated Diver were off Myroe and 60 Greylag, 350 Whooper Swan, 300 Curlew, 100 Lapwing and a few Greenshank at the Levels (Richard Hoy).

The putative Siberian Chiffchaff found originally by Neal Warnock (Nov 26) was again at Craigavon North Lake, Co Armagh this morning and responded instantly to both song and call of P.c tristis played on an MP3 player. (Dave Allen/Clive Mellon).

5 Waxwing were along Sandholes Road in Cookstown (Tony McCormick).

12 Waxwing were in Omagh opposite  Homebase. 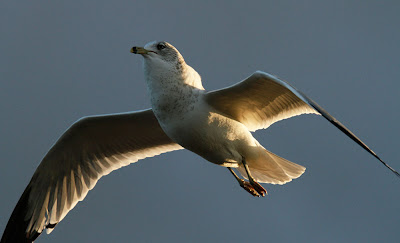 Our thanks to Guy Hamilton for sending in this unusual angle of the now resident Ring-billed Gull at Groomsport. 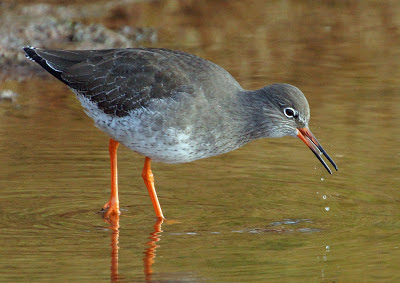 At least one of the Buff-bellied Pipit was still west of Tyrella. 3 Great Northern Diver were off the west end of Tyrella and 2 Red Kite, a Buzzard and a Peregrine Falcon near the entrance to Tyrella (Stuart McKee)

24 Waxwing were at Ormeau Bridge, Belfast this morning

Yesterday 68 Waxwing were along Dublin Road in Antrim (Nigel Ireland)

A red head Smew and 2 Great Northern Divers were at the west end of lower Lough Erne, Fermanagh this afternoon (Brad Robson)

16 Waxwings were in a garden outside Carndonagh and two separate Great Borthern Divers near Malin Head, Inishowen (David Hill and Raymond Fulton)

2 Woodcock were at Drumcairne Forest near Stewartstown (Tony McCormick)

4 Waxwings were yesterday in a garden on the Ahoghill Road, Randalstown (near Whiteside’s Corner) yesterday. They were eating cotoneaster berries (James Steel)

You can report sightings of Waxwings or any other rare or scarce birds to nibirds@live.co.uk

Thanks to Tom McCreery for this pic of a Goldeneye and to David Hill for the top Waxwing pic and James Steel for the bottom Waxwing pic. You can see more pics at www.nibirdpics.blogspot.co.uk

27 Waxwings were in garden at Grove roundabout, Ballymoney Road, Ballymena, this morning (I Millar)

6 Waxwings visited a garden at 10.00am at Prospect Rd,Carrickfergus (Pauline Majury)

4 Waxwings were along the Promenade at Larne (Adam McClure)

50 Waxwing were at Balfour Street near the Ormeau Bridge in Belfast at 10.30 (David Clarke)

12 Waxwing were on the Low Rd, Islandmagee. (There is a church called St Johns CoI - just past church on right hand side of road is a large house where the birds were feeding (Tom Ennis /A Dodds )

38 Waxwings were in Portstewart this afternoon, see picture below. (John Clarke).

An unspecified number of Waxwings were at Waterfoot, Co Antrim. Unusually they were described feeding this evening in the streetlight.

A male Blackcap was in a garden in Bangor (Derek Polley).

The adult Ring-billed Gull and 7 Red-throated Diver were at Groomsport (George Gordon).

A Goshawk was reported near Ballyboley Forest.

There was no sign of the Buff-bellied Pipits at Tyrella today but 2 Red Kites were opposite the car park. Approximately 1,400 Common Scoter and 7 Red-throated Diver were off Ballykinler. (Dermot Hughes).

A Whimbrel was feeding in the lagoon beside Groomsport this morning. (Sam Scott).

Yesterday one of the Buff-bellied Pipits was still at Tyrella (Birdguides).

Thanks to John Clarke for the Waxwing picture, Charles Harkin for the Song Thrush picture, Stephen Maxwell for the Linnet picture and Noel Austin for the Long-tailed Tit picture, and Alan Gallagher for the Kingfisher pictures. Check out more NI bird pictures at www.nibirdpics.blogspot.co.uk

6 Waxwings were on the Ballymoney Road, Ballymena, this morning, increasing to 20 in the afternoon (I Millar)


About 40 Waxwing flew across Sydenham by Pass coming from Victoria Park direction and heading towards Glentoran football ground, probably the same flock that has been seen around the Short Strand district over the last few days.(I.Graham)

A male Brambling was visiting a garden in Spa Co.Down.(D.Nixon)

A flock of Waxwing was along Thornleigh at the junction with Kenmore Drive in Lisburn (Garry Wilkinson).

The adult Ring-billed Gull, 4 Red-throated Diver, a Gannet and 3 Carrion Crow were at Groomsport.(G.Gordon)

Thanks to John Johnston for this pic of one of the Short Strand birds on Saturday. Also to Stephen Maxwell for the Turnstone photo. You can see further pics at www .nibirdpics.blogspot.co.uk 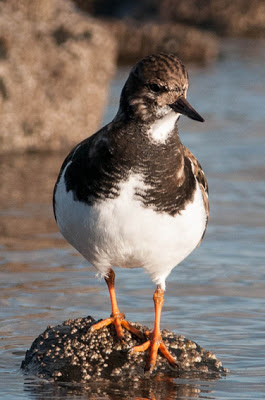 Below are pics of a Chiffchaff today taken at Craigavon Lakes and found by Neal Warnock, showing characteristics of tristis. The bird was heard calling on a few occasions, but was not sound recorded.

The bird was favouring a single willow and tall trees in this area:

A Crane has been reported on the southeast side of Antrim which flew over Nutt's Corner.

The Bonapartes Gull was at Sandy Bay, Larne this evening (Gavin Ferguson)

A single Waxwing was on the Moneyscalp Road, Castlewellan this morning (Adam McClure)

Two Waxwing were in a private garden in Donaghadee (James Robinson)

Two little egrets were on the estuary mudflats, one either side of the bridge on Island Road Lower (B90), at Islandmagee yesterday afternoon (David Rice)

A Wilsons Phalarope was reported from Trawbegga Bay, Inishowen. Also 10 Waxwing at Clonmany.

A Brambling and 10 Twite were with a large finch flock on the Derrycrow Road which leads to Reedy Flats, see picture below. (Ed O'Hara & Colm McQuillan).

9 Waxwings were in Thornleigh Drive off the Antrim Road in Lisburn. (Garry Armstrong)

The 2 Black-throated Diver were at Groomsport but not together (Tom Ennis, Alan Gillespie, Jeff Larkin)

The two Buff-bellied Pipits were still on the beach west of Tyrella along with 8 Twite. 8 Waxwing were along Ballyloughlin Road near Dundrum. (Joe Devlin & Clifford Sharpe).

A flock of Waxwing were on the Middle Road, Islandmagee, see pictures below. (Cecil Smyth).

A female Hen Harrier was near Larne. (Bill Guiller).

A Little Egret was  near the Ballygawley Roundabout, Co Tyrone this morning, it was about half a mile on Augher side, it flew down near a river beside A4. (Colin Bell).

On the Antrim side of Belfast Lough an adult Mediterranean Gull, Little Egret and 2 Long-tailed Duck were at Loughshore (Gerard McGeehan).

7 Waxwing were at the gates of Whitehead Primary School (Cameron Moore).

10 Waxwing were at Springfield in Fermanagh (Gareth Buchanan/Brad Robson).

At Strangford Lough 80 Pintail, 30 Turnstone and 300 Shelduck were at the Floodgates. 2 Little Egret, a Buzzard, Kingfisher and 64 Wigeon were at Anne's Point and 18 Gadwall at Kiltonga. 20 Skylark were along Ballyalton Road (Jim Whitla, Bangor RSPB).

Our thanks to Neal Warnock for the picture of the Bonaparte's Gull, Cecil Smyth for the first two Waxwing pictures, Stephen Maxwell for the next three Waxwing pictures, Mark Killops for the Buzzard picture and Dick Glasgow for the Long Tailed Tit picture. You can see more NI bird pictures at www.nibirdpics.blogspot.co.uk

75 Waxwings were at Ballycrochan Road, Bangor on Friday at 12.10 pm.(Hugo Ritchie)

The 2 Black-throated Diver are still at Groomsport, as well as 2 Great Northern (one in partial summer plumage). The adult Ring-billed Gull was at the harbour (George Gordon). 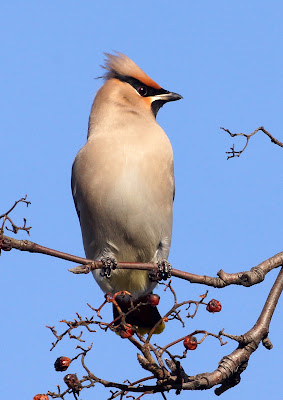 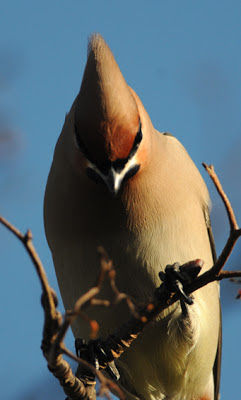 Thanks to  Alan Gallagher(top) and also Stephen Maxwell for the Waxwing photograph's  and also to Dick Glasgow for this close up of a Rook. You can see more pics at www.nibirdpics.blogspot.co.uk

For those of you on Twitter, don't forget that you can follow key bird news @nibirds
at 23:03:00 No comments:

There are now 2 Black-throated Diver feeding together between Groomsport harbour and Briggs. The adult Ring-billed Gull was at the harbour (Derek Polley, George Gordon).

A male Brambling was in a garden in Ballyholme (George Gordon)

Thanks to Stephen Maxwell for the pics of the Short Strand Waxwings, and Tom McCreery for the Meadow Pipit below:

Does anyone have any information on a ringing scheme for Goldfinchs or what type of ring these are?

Coming To A Neighbourhood Near You

Waxwings are being reported right across the country, if you want to catch up with these exotic visitors look out for flocks feeding on Hawthorn, Rowan or Cotoneaster berries or listen out for their high pitched trilling calls.

Let us know if you come across some of these exciting birds.

Thanks to Guy Hamilton for these excellent pictures of some of the birds feeding at Short Strand/Alberbridge Road in Belfast today.

During the winter months the Northern Irish countryside supports large numbers of several thrush species and already this winter we are seeing large numbers of redwing and fieldfare across the country.

The BTO is currently conducting a Winter Thrushes Survey which aims to find out more about the numbers and distribution of thrushes here, as well as the resources they need to survive to spring and the next breeding season, and they are asking for volunteers with help in carrying out the survey.

Extremely straight forward and easy to do, the survey involves walking a 1km square and simply recording any thrushes seen, the location of each sighting, habitat and food resources associated with each thrush or flock of thrushes detected.

The minimum coverage required is a single visit between 27th December and 10th January, so it’s a good excuse to go for a walk and burn off that excess turkey!

One of the Buff-bellied Pipits was seen again at Tyrella. (Chris Murphy & Bert Montgomery).

At least 2 Long-tailed Ducks were off Greenisland in Belfast Lough this morning. (Roger Woodward).

20 Waxwing were in a garden in Island Magee before flying off towards Ballycarry Bridge and 3 Long-tailed Duck off Fisherman's Pier in Carrickfergus (Robert McDowell).

A male Brambling and 2 Tree Sparrow were in a garden in Whitehead (Cameron Moore).

Yesterday a Great Spotted Woodpecker was at the junction on Monlough andMill Roads in Carryduff (David Clarke).

A Little Egret was at the Roe estuary along with large numbers of Brent Geese, see picture below. (Chris Colhoun).