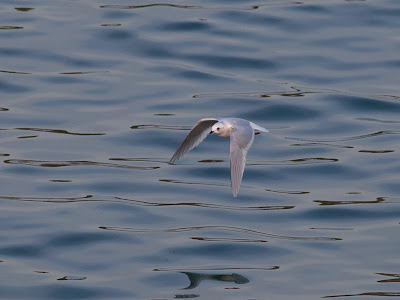 Our thanks to Tom Ennis who kindly sent in this photograph of the adult Ross's Gull from Ardglass, a superb find, good luck to everyone who will be undoubtedly twitching it over the next few days.


The spate of great birds for the province continues with the discovery of an adult Ross's Gull at Ardglass Co. Down. It was seen from the harbour wall at the mouth of the harbour entrance, found at 15.20 it was viewed until dark, hopefully it will stick around for a few days. This is the first Ross's Gull for Northern Ireland in fourteen years. Also at Ardglass were 8 Iceland Gull and at least 3 Glaucous Gull(T.Ennis/ A.Dodds)


The Ring-billed Gull was still present at Groomsport and the Ring-billed/Common Gull hybrid still at Millisle.(T.Ennis/A.Dodds)
On the Antrim side of Belfast Lough 8 Long-tailed Duck and 2 Great Northern Diver were at Greenisland. 1,200 Eider were in the Lough, the majority off Holywood (George Henderson).

The Black Redstart was still around the caves at Black Head (Cameron Moore).
A Crossbill flew over a garden in Fivemiletown (Colin Bell).
A Little Egret flew along the canal where it meets the Portaferry Road in Newtownards (D Kubright).
Yesterday along the north coast 15 Common Scoter, 8 Snow Bunting and 2 Great Northern Diver were at Magilligan but there was no sign of the Bewick's Swans at Derrytresk (George Henderson).
at 17:19:00