The Pectoral Sandpiper was still at RSPB, Belfast (Chris Murphy) 4 Ruff were also present.
The Lesser Yellowlegs was still at Blanket Nook, Donegal, seen from the pump station. Also 3 Curlew Sandpiper. Also 1 Tundra Bean Goose at Blanket Nook (Keith Bennett)
A Little Gull was at Kinnegar Shore/Pools, also a female Scaup flew past and a Tree Pipit flew over (Birdguides)
Myroe had around 3-4 hundred Golden Plover and a Ruff;  Ballykelly had 11 Greylags and the Bann had 2 Curlew Sandpiper. (Ian Graham)
2 White Wagtail were north of Kearney. (Richard Weyl)
Sandy Bay, Larbe Lough had a White Wagtail and a Sanderling. Glynn lagoon north had 12 Greenshank, a Little Egret and a White Wagtail. 40 Acre Pond near Ballycarry had 7 Little Egret (Ian Enlander)
You can share bird news via nibirds@live.co.uk or twitter @nibirds
The picture below is of a moulting male Peregrine: 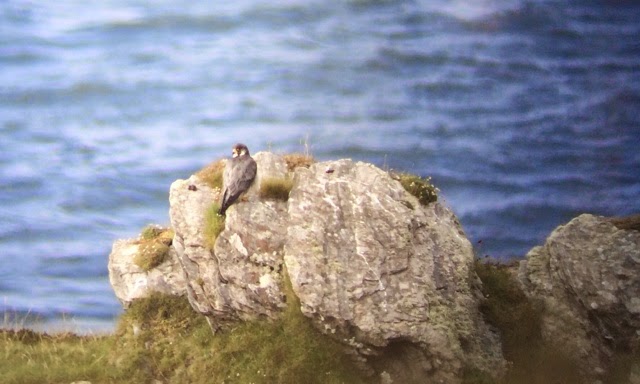